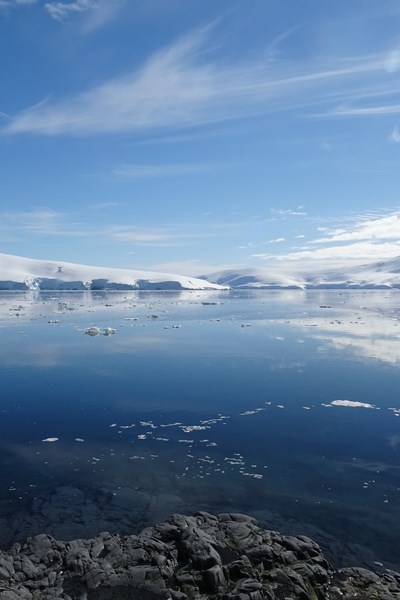 Our last month has flown past – press, training, saying goodbye, winding up lives at home and eating our favourite meals before departure.

During training in Cambridge, we all had a great time getting to know each other and learning about the season ahead. We were trained in the technical aspects of our roles like running the post office, shop, museum, and penguin survey. We also gained the skills required to live and work together in an isolated setting for four months – remote first aid, putting out fires, manual handling – how to sweep penguin poo without damaging ourselves! - and managing conflict. We have a range of new certificates to our names and are ready for any eventuality in Antarctica!

After training it was time to get packed. Imagine putting your life for the next five months into one bag – admittedly it turns out to be quite a big bag! So, while we stuffed our sturdy Xtratuf wellies with socks and pants we also threw in a few little luxuries – an extra top or two, fancy peanut butter and a special blanket… and it turns out each of us have also brought ‘pocket pals’ with us – small mascots to hold on to if the going gets tough. 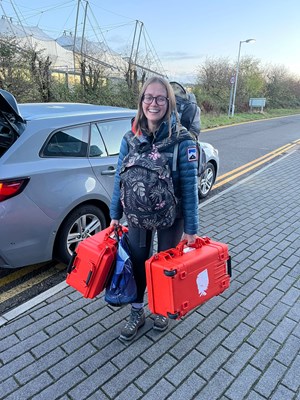 The team split into two groups for the journey south. The first group to set off went via Punta Arenas in Chile, and included Clare, Vicky, James and Ruth. Clare is this season’s postmaster, and Vicky is returning to Port Lockroy for a second time, having been there for the 2019-2020 season, to help with setup for the season. James is an electrician and will be at Port Lockroy for the first few weeks to carry out work at Bransfield House. This is the final step in allowing the base to be run entirely off solar power this season. Ruth, head of buildings and conservation, is coming to Port Lockroy to review the condition of the buildings after the long Antarctic winter.

We are in the second group to head south. With seven people and only six bunks, its going to be a busy base for the first few weeks of the season! It looks like this might be in our favour however – pictures sent of Port Lockroy from ships visiting the island show a picturesque winter wonderland with unusually high snow cover remaining. We will all have our work cut out shovelling snow to access the buildings, including the Nissen Hut (our home for the season) and Bransfield House, and to prepare the site to welcome visitors. It’ll be all hands on deck to get the base up and running. 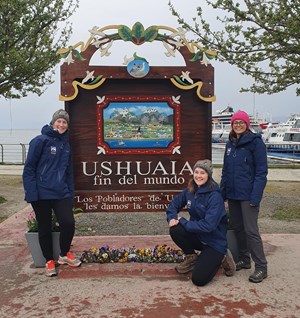 The snowy scenes at Port Lockroy are in stark contrast to the unexpected sunshine we experienced in Ushuaia. Here we were greeted by temperatures of twenty degrees. Given our southerly destination, we hadn’t thought to pack shorts, so it was a warm few days. In Ushuaia we have been setting up and testing our equipment and have also managed to find the time to eat our bodyweight in empanadas and have our final hit of green in the surrounding forests. 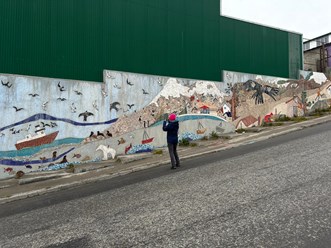 Pictured: (top) Ushuaia's murals and Natalie and Mairi make their way to the ship

We’ve also started to get familiar with the wildlife in the area, and have been ticking off bird species from our list – kelp gull, dolphin gull, southern caracara, and black-crowned night heron, to name a few. We even saw a seal in Ushuaia harbour, although we’re not sure which species! Ushuaia is full of murals and art depicting Antarctica and Antarctic species, and the harbour is packed with cruise ships waiting to carry visitors, including us. It’s impossible to be here and not feel the collective buzz of anticipation for the journey ahead!