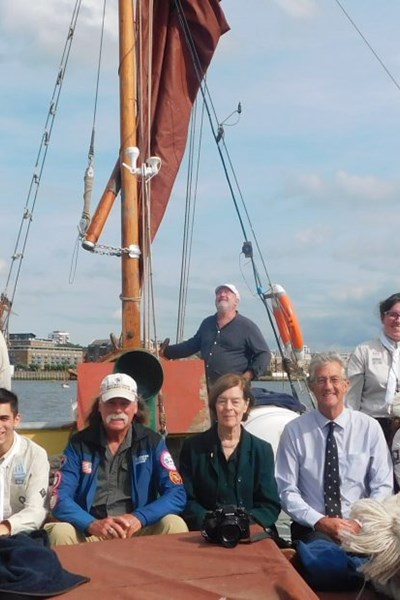 It was wonderful to see the Scouts sailing on the River Thames and under Tower Bridge last month, officially launching their Antarctic Research Project – ReQuest2021. Sailing aboard the 100-year-old Thames barge, the Lady Daphne, it marked the moment exactly 100-years ago, when the Shackleton-Rowett Expedition of 1921-1922 set sail aboard the Quest along the Thames for Antarctica, with two scouts included within their team: James Marr and Norman Mooney.

James Marr went on to have a lasting legacy in Antarctica, and has particular significance for us at UKAHT, when in 1944 as a marine zoologist, he led Operation Tabarin, the secret mission by the British Government to establish a permanent presence in Antarctica as well as undertaking a whole range of scientific work. Port Lockroy was the first of the overwintering bases to be established during Operation Tabarin but the scientific research and surveys here continued long after the War and the site later being recognised as the birthplace of the British Antarctic Survey.

On 30th December 2021 the team of ten scouts, and their leaders will follow in Marr and Mooney’s footsteps and depart from South America for Antarctica.

The team of Scouts on board Lady Daphne were hand-picked for their personal research projects on topics spanning climate change, the arts and science. One experiment the team will undertake is to study the Krill population of the region which is a basic component of the Antarctic food chain.  To do this the team has using the same style of Nansen Nets as originally used by Marr in his the experiments conducted 100 years ago. The data collected in 2021 will be compared to the data collected in 1921 and real time information will be gained on the health of the Antarctic waters.

“I am enormously impressed by the attitude, dedication and attention to detail that these ten members of Scouting have shown. It will be a truly life-changing experience for each and every one of them. I am very much looking forward to learning more about their individual projects and how we can work together to educate more people around the world about the need to protect our fragile polar ecosystem.”

The 23-day expedition will begin on 30th December 2021 with the 2000km+ voyage on board Bark Europa from Ushuaia, Argentina, crossing the infamous Drake Passage, to the Antarctic Peninsula which the Scouts will explore for two weeks. Whilst in Antarctica, as well as working on their projects, the team will get to help crew the tall ship and we will be delighted to have them also visit Port Lockroy. They will also make a number of landings to study wildlife and carry out some ice trekking through dramatic scenery.